Trap Bar Vs Barbell Deadlift: Which One Is Best For Muscle Gains? 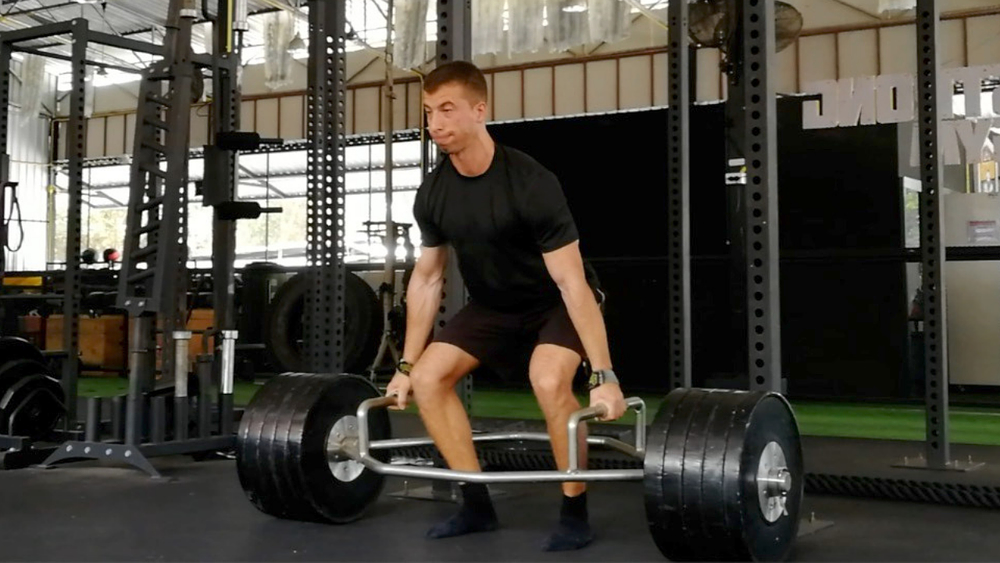 Long viewed as the bastard cousin of conventional deadlifts, the trap bar deadlift has fought its way out of the family dog house in recent years.

An increasing number of coaches and lifters are seeing the value of trap bar work for strength, performance, and longevity.

Having used it with my clients for a long time, I welcome this change in attitude. 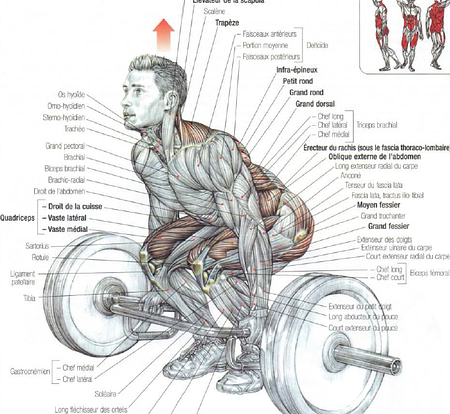 While the picture is in French, you can tell the quads, glutes, hamstrings, spinal erectors, and traps all come into play – just like in a conventional deadlift.

That raises the question:

If trap bar deadlifts have lots in common with regular pulls, what are the key differences?

With a straight bar, you stand behind it and grab it with an overhand or mixed grip.

In a trap bar deadlift, your body stays in the middle of the frame and you hold the handles with a neutral grip.

While knee and hip angles remain quite similar (look at the side-by-side pics above), you'll maintain a more upright torso with trap bar deadlifts, whereas conventional pulls put you in a more forward-leaning position.

Thanks to the more upright stance, trap bar deadlifts remove some of the stress from the lower back and place it on the quads.

Your back muscles still do plenty of work to stabilize your body under load. It's just that there's less strain overall.

Any man who hoists respectable weights can tell the difference in how your lower back feels following a deadlift session...

Lifting five plates with a trap bar won't beat your back too much. Doing the same with a straight bar can leave you sore for days.

In practice, I don't know anyone who does this.

Because you can't use as much weight. Which defeats the purpose.

A trap bar deadlift is not a great mass developer (more on this in a bit).

Smart lifters understand it doesn't make any sense. So they don't do it.

Use the trap bar deadlift for what it's good for...

Going as heavy as possible for brute strength development.

If you want more direct glute/hamstring/lower back involvement, you'll be better off doing Romanian deadlifts.

It's rare to see a regular guy pull 405 pounds or more on conventional/sumo deadlifts – and it's even rarer to see them do it with a double overhand grip.

So, unless you want to learn the painful hook grip, you're forced to use a mixed grip when the weights get heavy enough.

This can cause two issues:

First, if you never switch hands (one faces up, the other down), you'll develop imbalances in your arms and back.

Second, while not too common, biceps tears can happen on the side facing up.

You can mitigate both potential issues by using a double overhand grip with straps...

Or you can go with a trap bar.

Since you're using a neutral grip (palms face each other), you won't have to worry about biceps tears or muscular imbalances.

Trap bar deadlifts don't wipe you out as much as regular pulls, so they're easier to recover from.

Finally, the trap bar cleans up your form in a flash.

While few people know how to conventional deadlift with textbook technique, the number who can do so when there's any respectable weight on the bar dwindles next to zero.

The average Western "man" can't pull 315 pounds without entering uncontrolled spinal flexion (picture a scared cat with its back rounded and you'll get the memo).

With a few weeks of spot-on coaching, that same guy will pull three plates, no problem.

Did he become Hercules suddenly?

The trap bar is more forgiving than the Olympic barbell.

It's harder to mess up the former... even for guys with limited lifting experience or lower body mobility.

That's why I favor trap bar deadlifts with beginners.

You can sling some progressively heavier loads around, get stronger, and boost your confidence without spending a lot of time grooving your technique using baby weights – something that frustrates any competitive male.

Which provides a nice segue right into...

While trap bar deads are less technical than conventional or sumo, a ton of people still butcher it.

Let's cover the basics, so you stand out from the masses with textbook technique.

Standing in the middle of the frame, bend your knees while keeping your torso upright.

Without driving your knees forward, keep your chest up and push your butt back.

This is the same movement as in a Romanian deadlift (hip hinge).

Go as low as you can until you feel a hamstring stretch.

Next, bend the knees a second time and bring your hands to the bar.

Take a big breath into your belly, engage the lats, then push your feet through the floor as you stand up with the weight in hand.

With heavy loads, it takes a moment for the bar to break off the floor. It feels like the bar is stapled and no amount of grinding will set it free.

Many newbie lifters give up too soon, missing lifts they should have made.

Just be patient and keep pushing against the floor to overcome the inertia of the bar. At maximal loads, it can take a second or longer to get moving.

As long as you don't lose back tightness, you've got nothing to worry about.

Squeeze your glutes at the top to finish the lift with the hips.

Be careful not to "over hump" a.k.a. overextend through the lower back.

Unlike with a straight bar, there's nothing stopping your hips from moving past lockout in a trap bar deadlift.

Your body should be completely erect, with your hips stacked directly under your shoulders in the finished position.

After lockout, reverse the movement to bring the weight down.

To minimize eccentric stress and wasted energy, drop the bar. By that, I don't mean a free fall.

You'll still control the descent, but don't intentionally slow things down as you would do in a squat or bench press.

For more detailed technique cues with video demonstrations, check out my How to Squat, Bench Press and Deadlift DVD.

We touched on this earlier. The answer is no.

The best mass building exercises concentrate tension on a specific muscle you're trying to grow.

Trap bar deadlifts don't do that. They're a high-fatigue movement where tension is spread all over your body.

Other factors that make this exercise a mediocre choice for growth:

As a strength builder, trap bar deadlifts should have a place in your routine.

But they're not a great muscle builder.

Q2: What Is Strong on Trap Bar Deadlifts?

I have addressed this topic in detail in my previous article on deadlift standards.

To recap, these are my trap bar deadlift standards for healthy, trained men between age 20 and 45 based on their relative strength (weight lifted divided by body weight):

Anything less means you have a ton of work to do to reach acceptable strength levels.

What about board presses or football bar bench presses?

Just because the implement or range of motion is different doesn't mean an exercise is cheating.

Safety bar squats, football bar bench presses, and trap bar deadlifts are variations of the basic barbell movements – and may be a better option depending on your injury history and training goals.

Q4: Is It Easier to Deadlift With a Trap Bar?

If the handles are higher than the frame, then yes.

Compared to a straight bar, you can expect to lift ca. 10% more with a high-handle trap bar that comes with ~10 cm (4 inches) of elevation.

If the handles are level with the frame, it will depend on the make and "feel" of the bar.

I've tried a few such bars and hated them all. They wobbled and I couldn't use as much weight as in a regular deadlift.

No, because these athletes compete with a straight bar.

So most of their deadlift training should involve their competition stance – conventional or sumo.

Since there's less stress on the nervous system and lower back, you could argue trap bar deads are safer and easier to recover from.

Studies show greater peak velocity and peak power with a trap bar, which would benefit any field sport athlete. So there's also that to consider.

But what if you're a regular guy who lifts to get ripped, not to chase a seven-figure paycheck?

Trap bar deadlifts are a great option for full-body strength development, especially if you have lower back issues.

The trap bar offers major benefits to guys who feel too banged up going conventional or sumo.

You can still enjoy deadlifting 500+ pounds without worrying too much about wrecking your spine or hobbling 24-72 hours after your workout as if a Mac truck ran over you.

Also, if you're a strength coach working with athletes with a million-plus dollar contract on the line, trap bar deadlifts offer a safer alternative to the straight bar. 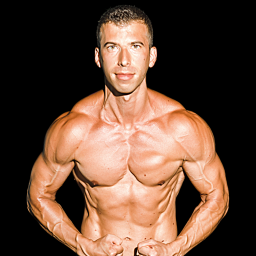